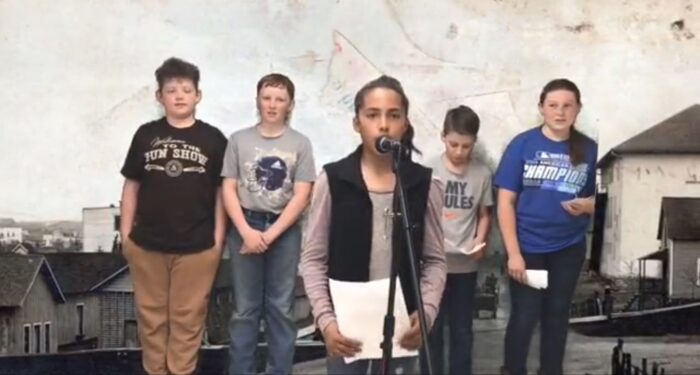 Aliyah, Payton, Adeline, Tyce, and Kristopher wrote plays and performed them for their sixth grade classmates all year. So when they heard about the Hip History Contest and a chance to share the history of Buxton, Iowa, in a creative way, it was a no-brainer.

“We decided to make one for the Buxton competition,” said Aliyah, “since we already knew how to do them.”

For the Hip History Contest, they created a play to demonstrate how Black and white residents of Buxton were treated equally and paid the same wages at a time in the United States when people of color were egregiously discriminated against.

Middle and high school students were invited to participate in the Hip History Contest to help spread the word about the extraordinary town of Buxton and how its lessons on unity and racial equality can be applied today to help combat racism in America. Their video entries were judged on creativity, inspirational, educational, and historical content, and application of an excerpt from Rachelle Chase’s book “Creating the Black Utopia of Buxton, Iowa.”

Aliyah and Adeline wrote most of the script and the others helped edit it and come up with ideas. All of them worked on the props and problem-solved issues.

“It was kind of, like, hard to get the green screen and all that stuff to, like, fall together with the props and stuff,” said Aliyah. “So I think that was, like, one of the hardest things we had to do.”

They worked on their play nearly every day for a month, both inside and outside the classroom.

“We got over on Snapchat,” said Payton, “and did a few meetings, practices, and then the rest at school.”

Before they recorded it, they got feedback from others on how to make it better.

They liked working on it at school because it gave them something to do with their free time. Everyone agreed emphatically with Payton when he said, “It was a ton better than [online literacy software] Lexia.” When he added, “and it got us out of class a little bit,” they all laughingly agreed with that, too.

“I didn’t know much about Buxton,” said Kristopher. “So, like, literally everything I learned was new. So, like, I didn’t even know it was a coal mine or, like, where it was or anything about it.”

“I learned about the equality in, like, how everyone can eat everywhere,” said Addy. “Everyone could, like, meet and everyone worked together.”

The equality aspect was a surprise to all of them, which is why it was a theme throughout their play. It was something they wanted others to learn—the importance of “treating everyone the same, no matter their skin color” as they stated on their entry.

Not only did they enjoy learning about Buxton, the experience of working together was great and they had fun.

“I think it was really enjoyable for the students, because it was something authentic,” said Ms. Heaton, their teacher. “They were, you know, creating a project for a reason. It wasn’t just because the teacher said, ‘oh, let’s do this.’ It was because, you know, it was gonna be shared maybe with the world or the media, or whomever. And I think that made it fun. And I also think that the competition really encouraged the kids to kind of promote their own video, which was fun to see they were excited to look at that, you know, weekly to see where we were in they were in votes.”