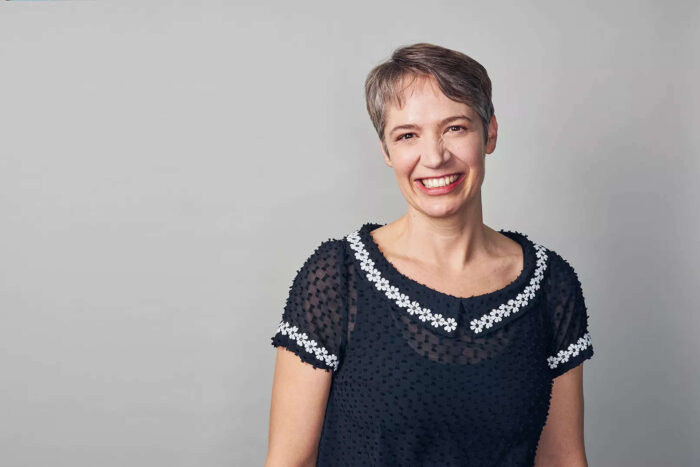 Charity Nebbe is a natural at putting people at ease. Whether they’re a guest on “Talk of Iowa” or a stranger on the street, there’s something about Charity that gets people to open up.

“I think in some ways it’s innate, it’s who I am,” says Charity, host of Iowa Public Radio’s “Talk of Iowa” and “Iowa Ingredient” on Iowa PBS. “My mom has joked that when I was three years old, she wanted to hire someone just to listen to me and answer my questions. She’s like, ‘Not only did you talk all the time, but you ask all of these questions that require thoughtful answers and it was exhausting.'”

But Charity doesn’t ask questions just for the sake of asking them. She’s genuinely interested in what her guests have to say and because of this interest, she puts in the time and effort to prepare for her interviews and put her guests at ease. She likes to think the intimacy of radio helps make them comfortable, too.

“Radio is just a really intimate format because people always listen to the radio alone,” says Charity. “Maybe they’re in their car, maybe they’ve got earbuds in their ears, but they’re by themselves. And so this idea of an audience is fictional, you know, you’re really only ever talking to just one person. So when I think about the conversations that I have, on a talk show, it is a conversation between three people. It’s my listener, it’s my guest, and it’s me. So I think that that makes it feel intimate, too, because it really is just us.”

This intimacy is one of the things Charity loves about radio. Her radio career began at WOI in Ames when she was a college student majoring in political science and biology and grew to include Chinwag Theater, a nationally syndicated public radio show she produced and co-hosted with author Daniel Pinkwater.

Charity was 22 years old at the time she started Chinwag Theater and had never made a half-hour program before. But when Rabbit Ears Radio went off the air, she wanted to fill that vacuum and felt Pinkwater would be the perfect partner. She’d always loved children’s literature, loved Pinkwater’s books, and felt they had “hit it off” when she interviewed him.

Chinwag Theater, which Charity says she “invented out of thin air,” got funding from Amazon.com and aired on 73 stations across the nation.

Chinwag Theater wasn’t the first time Charity took an idea and turned it into reality or seized an opportunity. This is the norm for Charity. Shortly after graduating from college, she had an idea for a children’s book that became “Our Walk in the Woods,” published by Mitten Press in 2008. Prior to becoming the “Talk of Iowa” host in 2010, when she was working as a host and producer at Michigan Radio, the station acquired a television station and needed “camera talent.” There, she got her start on television.

More recently, because she struggled with body image as a child, she started participating in Girls On the Run, “a character development and running program for girls.”

“When I started doing Girls On the Run, from the very first day I was coaching, I had boys coming up in the hallway and saying, ‘What about us?'”

“Boys need a place where they can learn to understand their feelings and, you know, learn to be their best selves and learn that it’s okay to be kind,” says Charity, “and learn what it means to be a man and that you can be a man and be your authentic self as well.” Thus, Charity co-founded Let Me Run Eastern Iowa Corridor.

This year, Charity generously donated her time to Uniting Through History’s Hip History Contest as a judge.

It’s fitting for Charity that the Hip History Contest involves middle and high school students. Middle school was a particularly challenging time that helped shape the Cedar Falls native into who she is today.

The bullying Charity experienced in fifth and sixth grade was “terrible,” she says, “but it is a big part of who I am.”

“I think the most important thing is to remember that other people cannot diminish you,” Charity says. “All of the things that made it easy to bully me are also the things that make me very good at what I do and are things that people love about me as an adult. They made me weird when I was in fifth grade, but they’re very special, unique things.”

Additionally, Charity advises young people to “be brave” in pursuit of their dreams and not let others get them down.