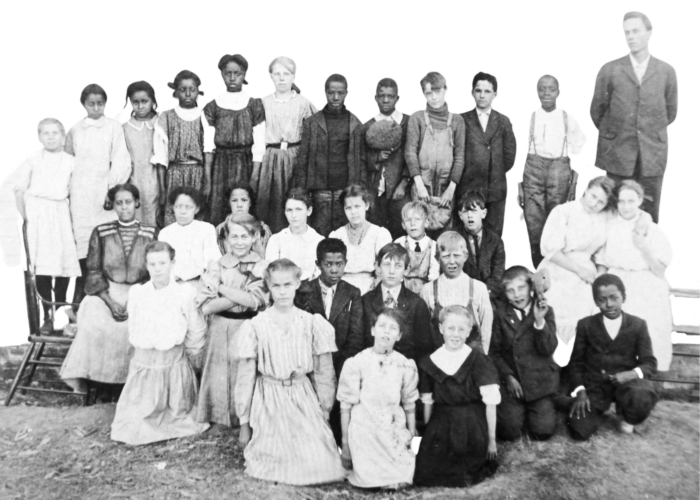 “While there were some cruel masters,” said my teacher, “most took good care of their slaves … Black people couldn’t take care of themselves, so the slave masters did … Black people were happy on the plantations…” As she spoke, she directed a seemingly sympathetic smile my way.

I felt the eyes of everyone in the classroom on me.

I squirmed in my seat. I stared at my textbook. I couldn’t wait for this lesson on “Black history” to be over.

Other lessons over the years in my predominantly white schools included Africa. The whole African continent—excluding Egypt, which featured magnificent pyramids built by Egyptians with bronze skin and white features—was represented by photos of loin-clothed Black men and bare-chested Black women accompanied by text detailing how the men hunted with spears and the women made baskets. That’s all I remember being taught of the “history” of Africa.

If my parents hadn’t instilled in me a strong sense of pride in being Black and the belief that I could do anything and be anything, what would this have taught me? If this was the only “Black history” white people learned, how would they—consciously or subconsciously—view Black people?

While I knew this version of Black history was wrong, I’ve met others who’ve accepted it. A notable example happened at a presentation I attended in Ottumwa, Iowa in 2019. Once again, I was the only person of color in the room.

“Slaves were provided room and board,” said the presenter, then later added, “When Marcus Garvey tried to get Blacks to return to Africa, none of them took him up on it.”

There it was again, the kind-enslaver-took-such-good-care-of-his-slaves narrative with a post-emancipation twist—that life was so good, Black people passed on Mr. Garvey’s offer.

I shouldn’t be shocked when I hear these versions of history. And yet, each time, I am. Blatant distortion and outright omission of Black people’s experiences and contributions to this country are perpetuated in American history.

Every day I seem to learn something new about Black people I was never taught in school—more examples of the horrible things, such as the massacres, lynchings, and unequal laws; the pervasiveness of Jim Crow in every aspect of Black life; the sheer magnitude of Black men and women unjustly conscripted to convict labor after the emancipation of slavery; and the myriad of ways this and so much more resulted in the systemic racism still in existence today.

Yet, through my horror, I marvel at what Black people have endured, how we have persevered, what we have accomplished and contributed—and continue to contribute—to this country. I feel pride in the inventions made by the enslaved and the contributions and accomplishments of Black people of every occupation—wealthy business owners, activists, inventors, educators, doctors, and more—before, during, and after slavery.

Black people have played an integral part—unwillingly and willingly—in every part of the building of this country. And yet, so many of us don’t know about it.