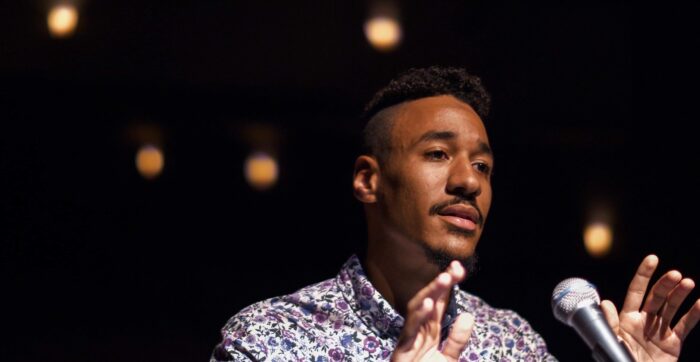 The Hip History Contest has eight talented judges. First up, is Caleb “The Negro Artist” Rainey.

Caleb Rainey always knew he wanted to be a writer, but even at a young age he grappled with what it would mean to be a Black artist.

In seventh grade he read Langston Hughes’ essay The Negro Artist and the Racial Mountain, where Hughes has a conversation with young Black artists.

When Rainey started performing professionally as a poet, he adopted the stage name “The Negro Artist” as a tribute to his Black identity and Hughes’ essay.

“I wanted to remind myself that no matter when I took the stage, people were going to see me as a Black man,” Rainey says. “I’m going to be a Black artist no matter what I wrote about, and I had to go, ‘I’m OK with that.’ And so, part of having that stage name is to say, ‘Hey, I see it, too. I’m here. I’m me, and I’m happy about it.’ And it also has sparked some really cool conversations that are really important to me because I’m an educator.”

“IC Speaks is a passion project,” Rainey says. “The fact is, at 16 I decided I wanted to be a poet and I couldn’t find spaces where I felt comfortable, where I felt welcome. My high school had a poetry club but it was very white and traditionalist, and that was not really what I was going for. And so for me, IC Speaks is just recreating that space for the younger generation.

“I know at 16 I had real thoughts and feelings and real ideas about the world that I wanted to share,” Rainey says. “I want to give that space to them. And so it’s been really, really exciting to see all these students step into their own voice.”

Rainey has known from a young age he wasn’t a “traditional” poet. Spoken word poetry is what appealed to him then and now. Not only does he write his poetry on paper, but spoken word also is part performance.

“Spoken word is historically more inclusive,” Rainey says. “It’s a Black art, and it’s also very open to other sexualities and genders and different cultures. The other thing that I loved with spoken word is just the power of performing. When you share a poem on stage, that poem becomes somewhat of a living being. It feels real and it’s palpable.”

Rainey says he will write a third book, but it will be a lengthy process of self-reflection and reckoning with the various aspects of his Black identity, from sexuality and gender to race and religion.

“I have poems that are tackling that and I know that’s going to be a book in the future,” Rainey says. “It’s just a concrete truth for me. I know that’s coming. It just isn’t here yet and I think part of that is because that kind of writing takes a lot of self-reflection and I need a lot more time to do that.”